Our own Santa Russ was featured in a post over on the Seattle Times job blog. Russ has been singing with the Market Street Singers since the very beginning of the choir, has served on the board of directors and (wearing his other, non-Santa hat) has designed and printed all our publicity posters, fliers and programs. We're so lucky to have our very own Santa...


What do you do? I have the wonderful job of having my picture taken with thousands of children of all ages while they tell me what they’d like for Christmas. It’s also a good time for me to review the "Naughty or Nice" list. Since Santa’s milk glass is always half full, I sometimes have to ask the tough questions of those who might need to convince me they belong on the "Nice" side of the ledger.

How long have you been doing that? Some would tell you I’ve been bringing joy to children for hundreds and hundreds of years. My, how time and reindeer fly! It’s a good thing I age well.

What are the most important skills or qualifications for the job? Well, as you know, there is only one Santa and my qualifications are simple: I love bringing happiness to children. Seeing the magic and anticipation in the eyes of those coming to see me is what keeps me young.

Best part of the job? Without question, the best part of the job is seeing the genuine love and excitement children have for me. Being appreciated never gets old. Best adult thing that’s happened: I partnered with a young man to surprise his girlfriend with a wedding proposal, and she said yes! Best thing about the job that happens fairly regularly: It’s when a young child looks you in the eyes and says, “I love you, Santa.” That never gets old or taken for granted.

What surprises people about your job? It can be a little harder than it looks to sit with hundreds of families in a given day, hearing their stories and having flashes go off all around you, but it’s all worth it. Could you imagine a better job than being jolly old Santa? I get to play in the world of imagination with every child who believes in me and for that, I will never get old.
--Via his elf, David Mickelson at Arthur & Associates

And if that weren't enough, his space age, top-of-the-Space Needle persona is featured in a photo gallery also at the Seattle Times. Check it out here! Super cute pictures!

Posted by Terrell at 7:56 AM No comments:

My choir director from Dallas sent me this one... 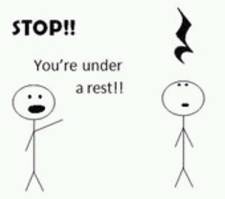 I really enjoyed the street show as well as the full chorus in the church. Here's a momento from the streets.

Best wishes, and thanks again! 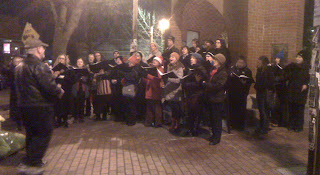 Posted by Terrell at 7:08 AM No comments:

Posted by Terrell at 7:03 AM No comments:

Sarah C. got a nice picture of the choir caroling on Market Street after last Saturday's concert. Cold but fun! 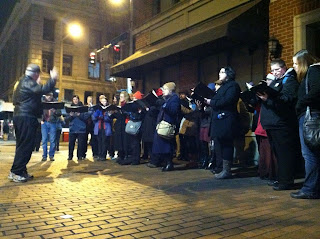 Posted by Terrell at 8:02 AM No comments:

How cute is this?! Japanese youth group playing "Sleigh Ride"

Posted by Terrell at 7:18 PM No comments:

Lovely little concert last night, if we do say so ourselves. The choir sang for about 45 minutes, mostly Christmas pieces with one Hannukah song as well. Then we opened up the floor for a sing-a-long. Have to say there were lots of good voices in the audience. Potential members, perhaps??? Afterwards, we reconvened in front of the Ballard Library and caroled along Market Street. 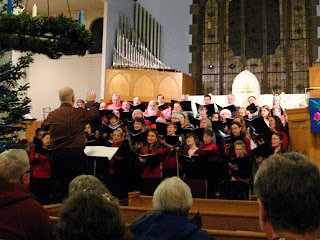 We'll be singing at the Ballard Landmark on Tuesday and the Columbia Lutheran Home next Sunday as part of our mission to use music to build community in Ballard and throughout Seattle. Happy Holidays, everybody!
Posted by Terrell at 6:57 PM No comments:

Last night was the Market Street Singers' Board of Directors' (first annual? Who knows!) Holiday Dessert Buffet. During this year's annual meeting we held a silent auction selling services to each other to raise money for the choir. The Board as a group sold spots for a dessert buffet at Barb and Ed's beautiful Magnolia house. Board members provided an array of desserts, wine, coffee, punch and hot chocolate. It was a lovely evening and a great fundraiser. Special thanks to Barb and Ed for hosting! 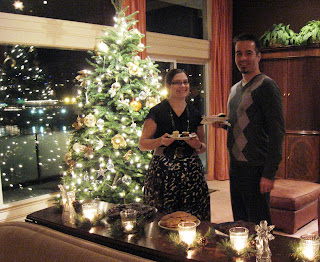 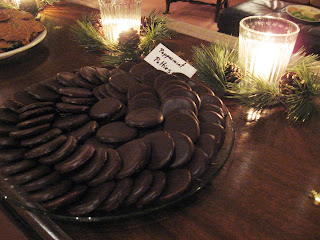 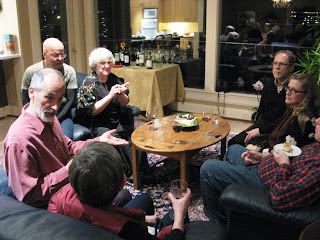 Holiday Joy To Go -- the Poster! 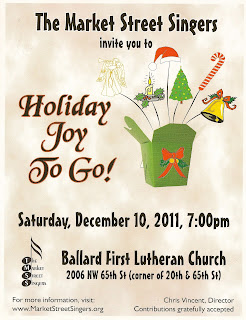 Posted by Terrell at 6:06 PM No comments:

Get out and sing!

'Tis the season of Christmas concerts. Of course you'll want to attend ours on December 10th. (Need details? Click here.) And be sure to plan to come caroling with us on Market Street after the concert. Singing along is so much fun! Here are some other opportunities to sing out this season...

The Garfield High School Orchestra Messiah Sing-a-long One of the best high school orchestras in America does this yearly event as a fundraiser for their program every year. The music is great, there are no divas (everybody sings everything) and they let you sing the Hallelujah chorus twice. Come out and support this great program on December 3rd.

Music Center of the Northwest Messiah Sing and Play-a-long Bring a food donation for FamilyWorks Food Bank as admission to the 25th annual "people's Messiah" on December 11th at St. John's Lutheran on Phinney.

I promised in my member profile in this week's cyber-gazette to post a picture from my middle school choir. This picture appeared on the back of a recording my church choir did in about 1970. Yes, it was vinyl. No, I can't upload the recording because I don't own anything that can play vinyl. Can you find me??  -Terrell 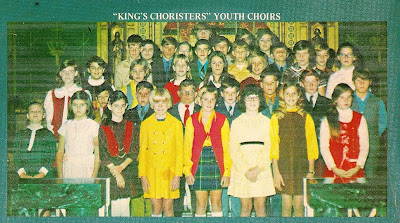 OK, now I'm challenging the rest of you guys to pull out some vintage snaps of you singing or doing something else musical. Kate, I know we'd love to see a shot of you in your band uniform!﻿
Posted by Terrell at 6:55 PM No comments:

I'd say that Tuesday's annual meeting was a success by any standard. We accomplished all the business we needed to get done with a minimum of fuss (or boredom). We ate yummy pizza, tasty veggies and delicious desserts (kudos to the cooks and bakers!) The silent auction went off beautifully (again, kudos to everyone who donated services and everyone who bought them!) And we even got in a little rehearsal time. Props to Kate for keeping everything so organized and moving along and to all those who pitched in to help with set up and clean up and everything in between. Pictures from the evening are posted on Flickr but here are a couple to get you to click through. 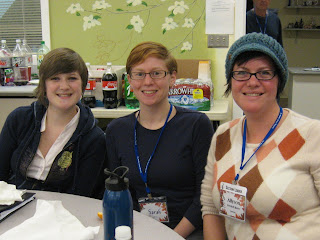 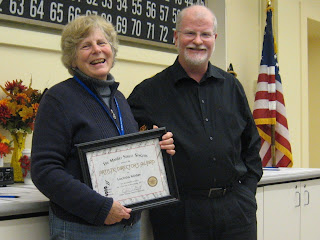 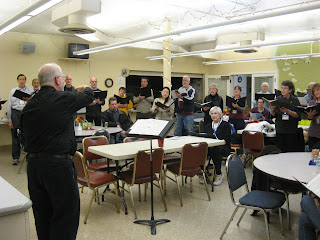 Posted by Terrell at 9:19 AM No comments:

The Market Street Singers invite you to a performance of holiday joy, winter reflections, and some wicked seasonal comedy. This unconventional community choir plans to leave no aspect of the season uncovered. After the concert at Ballard First Lutheran Church, you'll find "the Singers" caroling around downtown Ballard. Admission is free, but contributions are always gratefully accepted.
Holiday Joy To Go!
Saturday, December 10 at 7:00 pm
Ballard First Lutheran Church, 2006 NW 65th St
(corner of 20th and 65th, across the street from Smokin’ Pete's BBQ)

This concert is presented in conjunction with the Ballard Artwalk, a fabulous and fun Ballard tradition, which we encourage you explore before and after the performance.

For more on the Ballard Artwalk: http://www.myballard.com/ballard-artwalk/
For more about The Market Street Singers visit www.marketstreetsingers.org or call 206.465.3296
Posted by Brandy at 11:09 AM No comments:

I realized recently that I never got around to posting the small number of pictures I took at the picnic this summer. I just added them to our Flickr group so you can go see us shivering at Golden Gardens in July. Here's one to get you started. I love the expressions on these faces... 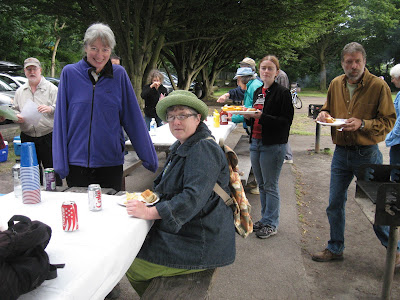 Posted by Terrell at 8:02 AM No comments:

As I promised the board, I plan to post occasional bits or fun as well as news about the choir. This video has been making the rounds lately after being picked up by Gawker.com. Once you watch it (it is pretty funny) be sure to click through to http://laolaiqiaogaga.blogspot.com/ and read the translation of the lyrics and the comentary about Chinese culture. So interesting!
Posted by Terrell at 9:28 PM No comments:

Welcome to the new Market Street Singers Blog where we plan to post news about our choir, pictures of performances and parties, invitations to upcoming concerts and various whimsical whatnots. 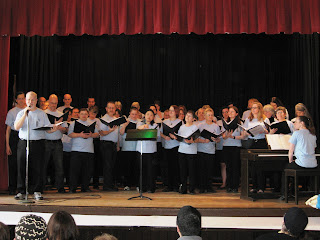